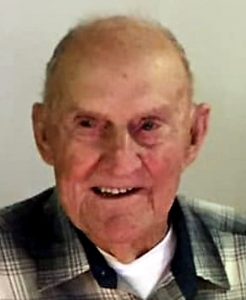 Charles was born on February 7, 1921, in Rural Davis County, Iowa, the son of Charles Edgar and Dora Belle Duckworth Alexander.

He attended one room country schools in both Schuyler and Scotland Counties in Missouri. He served four years in the United States Army, stationed in Alaska where he helped build the Alaskan (ALCAN) Highway. Upon returning home Charles met the Love of His Life, Mabel Ruth Holton. They were married in Lancaster, Missouri on November 5, 1948, and to this union four children were born.

Charles was a member of the Richland Baptist Church, near Hitt, Missouri, where he served as deacon for many years. He served on the Board of the Scotland County Soil and Water Conservation District for more than 20 years.

Charles and Ruth farmed most of their life and never really retired, always doing something on the farm. He always took the family on vacations and enjoyed traveling. He was an avid hunter, fisherman, loved golfing, and was a number one fan of his grandchildren at all their activities. Most of all he will be remembered as a family man with his faith, church and his family most dear. Charles would share the gospel of Christ to anyone he met.

Charles was preceded in death by his parents, two brothers, Aubrey and Herbert Alexander and Herbert’s first wife Lavern and his second wife Bessie.

Funeral Services were Monday, January 27, 2020, at the Memphis Funeral Home in Memphis, Missouri. Interment with Full Military Honors by the Wallace W. Gillespie Memorial Post 4958 of Memphis, Missouri, was at the Pleasant Hill Cemetery, north of Crawford, Missouri.

An expression of sympathy in memory of Charles Alexander Jr. may be left to the Richland Baptist Church or the Pleasant Hill Cemetery Association and may be left at or mailed to the Memphis Funeral Home 378 S. Market Street, Memphis, Missouri 63555.