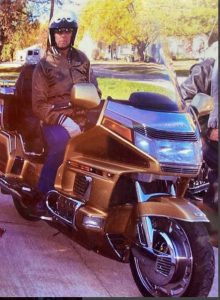 Donald was born on November 27, 1933, in rural Memphis, MO the son of Walter and Thelma (Jones) Fogle. He was raised in the Memphis area and attended the local schools. Donald served his country with the US Army from 1954-1956 serving in Germany following basic training. He was united in marriage to Dora Humes on February 9, 1957, in Carrolton, Missouri. Donald worked as a carpenter and as a truck driver; hauling gasoline for Tippett Oil Company when he retired. Following his retirement, he continued to work as a carpenter with John Adams. Donald loved his Goldwing motorcycles proudly caring and owning several of them over the years and was able to travel most of the United States with his motorcycle friends to whom the referred to him as “Honda-Man”

He thoroughly loved his family and grandchildren and the time he was able to spend with them and will be greatly missed.

Donald is survived by his wife; Dora Fogle of Memphis, his sons; Faron Fogle and his wife Debbie, Kevin Fogle and his wife Jeanette and both of Memphis. His grandchildren; Samantha and Bob Willis, Keil and Brooklynne Simpson-Fogle and Jake and Amber Fogle and 3 great-grandchildren; Gavin, Viviane and Maverick Fogle. He is also survived by his sister Betty Ambler of Salina, Kansas and his brother-in-law; Ernest Leroy “Doc” Humes, sisters-in-law; Pat Varnold, Mary Fleer, Lois Humes and Joann Humes along with several nephews, nieces, cousins and friends.

According to his wishes Mr. Fogle was cremated and services will be held at a later date.

Memorials have been established to the family’s choice and can be mailed to the funeral home at PO Box 2 Green Castle, Missouri 63544.

Casady-Luscan Funeral Solutions of Green Castle, Missouri is honored to serve the Fogle family at this time.