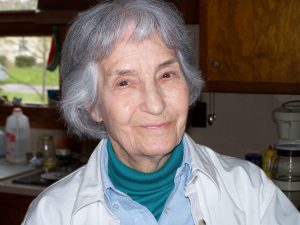 Margaret grew up on the family farm in Knox County, near Rutledge. and attended school at the Antioch Rural School.

Margaret married Richard Melvin Snyder on September 21, 1938. Margaret and Melvin’s son Jack was born in 1941 while they were living in Kirksville. The family moved to Pocatello, Idaho in 1942. In 1946, a daughter, Kay was born. The family lived in Pocatello until Melvin passed away in 1950. At that time, Margaret and the kids moved back to Missouri. They lived with Margaret’s parents on the farm, spent a few months in Rutledge, moved back to the farm and then settled in Kirksville in 1954.

Margaret worked at McGraw Edison in Kirksville from 1965 to 1975. In 1975, Margaret moved back to the family farm to care for her parents until they passed away, her father in 1981 and her mother in 1988.

Margaret enjoyed going to dog and gun sales and auctions, including the Rutledge and Colony flea market where she found many treasures over the years.

Margaret was always an animal lover with many different types of pets over the years. She has had horses, one was named Rowdy; at least one pig; many hens, including Henny Penny; maybe even some roosters; more dogs and cats than she can count and even a pet raccoon. The grandkids could always count on at least one or two dogs or cats to play with when they came for a visit.

Margaret loved to sing. Some of her favorite songs include Little Brown Jug and This Ole House. She loved John Wayne movies.

Margaret enjoyed travel, both near and far. She enjoyed spending time with her children and their growing families throughout the years in Illinois, Iowa, and Wisconsin. Other memorable trips include travelling to Canada one summer to attend the Calgary Stampede and another summer to ride the train from the Midwest to Washington State to visit her brother and her granddaughter and their families.

The family would like to thank the La Plata Nursing Home for their loving care and staff.

Funeral services will be held on Sunday, October 31, at Hudson-Rimer Funeral Chapel, 408 E. Morgan Street, Edina, Missouri 63537. Visitation will be from 1-2 pm, with a private family service at 2 pm, followed by burial at the Pauline Cemetery in Rutledge, Missouri.

Memorials in memory of Margaret are suggested to Pauline Cemetery, La Plata Nursing Home, or the charity of the donor’s choice.