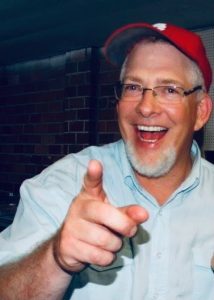 Jed Alton Jutte was born on July 2, 1969, in Keokuk, Iowa, the son of Richard C. and Anna Lou (Gallup) Jutte.  He relocated to Heaven on October 7, 2021, from the VA Hospital in Columbia, Missouri.

Jed spent all his school years on the family farm in Scotland County, active in 4H, football and challenging his sister.  After high school, Jed served for four years in the US Army, primarily stationed in Fairbanks, Alaska. Upon discharge, Jed moved to Texas where he pursued his education and lived for many years.  He earned his BS in Criminology from the University of Texas-Arlington, and he went on to obtain his Masters’ Degree in Criminal Justice from the University of Nebraska.

Jed served as the Chief Juvenile Officer in Mineral Wells, Texas for 10 years.  He then moved to a larger department in Texarkana, Texas, where he served as the Assistant Juvenile Officer.  After his Father graduated to Heaven in 2005, Jed moved back to Memphis to care for the family farm.

Two years later, he returned to his passion of criminal justice as the Chief Juvenile Officer in Dumas, Texas.  Jed spent two years in this position in Moore County, Texas.

He returned to Scotland County where he enjoyed raising cattle, coaching elementary football, immersing himself in Christ (church activities, Bible studies, youth programs, nursing home ministry, Gideon’s, etc.), visiting Mom and taking drives, and simply spending time visiting and laughing with loved ones.  Most recently and while managing cattle, Jed served as a real estate agent for Primrose Realty, worked at Preferred Family Health of Kirksville, and finally his dream job as a Crop Adjuster for Rain & Hail.

While Jed enjoyed his relationships by being a genuinely fun, bold, and happy friend, his true hallmark was his unshakable faith in Jesus Christ.  Jed knew that this world is not our final destiny, and he ultimately strove to be a servant and witness for the Lord.

To this end, a beautiful means of memorializing him is through Gideon’s International.  A Bible can be donated in Jed’s name for only $5. (www.gideons.org/donate#, 615-564-6000).