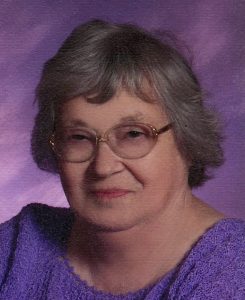 She was born the daughter of Glen Allen and Helen Modena (Kutzner) Chambers on February 6, 1925 in Scotland County.

Virginia married Emmett Porter Heckethorn, who preceded her in death on October 21, 1994.   They published the Gorin Argus newspaper for many years.

Virginia was a member of the Cedar Grove Club for 20+ years, loved planting flowers and feeding birds, squirrels, and the neighborhood stray cats.   She was adept at word puzzles and enjoyed going to the nutrition site and visiting with everyone.

She was an avid reader who never read a book in which she didn’t find something to enjoy about it.  Virginia loved music and had three songs she sang every day: The Old Rugged Cross, One Day At A Time and You Are My Sunshine.

She was preceded in death by her husbands; sons, Omar Edward Heckethorn Sr. and Wesley Ray Heckethorn; and a sister, Marjorie Anita Hatfield.

Condolences may be sent to the family of Virginia Woods by signing the online guestbook at gerthfuneralservice.com.