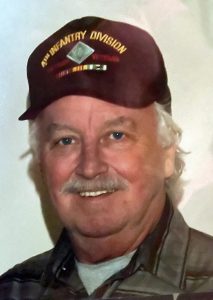 Charles Reedy Jr. 72, of rural Arbela, Missouri, passed away suddenly at his home, on Tuesday, October 5, 2021.

He was born on February 25, 1949, in Edwight, West Virginia, the son of Charles and Virgie Dickens Reedy.

Charles attended school in West Virginia and served his country in the United States Army, serving two tours in Vietnam.

After being discharged he moved to northern Illinois to make his home. He worked as a mechanical engineer for the Aero Space industry and retired from the Schindler Elevator in Niles, Illinois in 2010.

On November 8, 2013, in Branson, Missouri, Chuck married Nadine Robinson and they made their home north of Arbela, Missouri, on a farm that he had hunted on for many years.

He was an avid hunter, and enjoyed restoring old cars and taking them to shows around the area, but most of all he loved the country life with Nadine by his side.

Chuck is survived by his wife, Nadine of rural Arbela, Missouri; a son, Charles Reedy Jr. of Foreman, Arkansas and his children, Tyler, Ember, Harley and Katherine; a step daughter, Shelley Antonelli of Crest Hill, Illinois and her children, Levi, Nico, Mia and Hannah; three sisters, Murla and Roger Henderson of Mesa, Arizona and Diane and Bruce Pomponio of Illinois; Alma Milan of Arlington Heights; Three great-grandchildren,  along with nieces, nephews, cousins and host of friends and neighbors.

He was preceded in death by his parents and three sisters.

At his request, he wished to be cremated and his ashes returned to a family plot, Dickens Family Cemetery, Naoma, West Virginia, to be scatted on his grandfather’s grave.

Memphis Masons & Widows Sons will have a Chinese lantern memorial at the family home, 27717 County Road 702 Arbela, Missouri, on Friday October 15, at 8:00 PM.  All friends are welcome to attend.

Memphis Funeral Home is assisting the family with Chuck’s wishes.