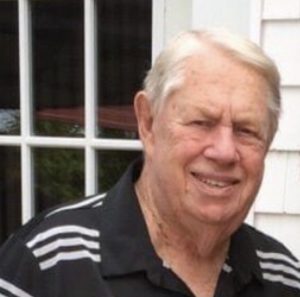 He was born the son of Fred C. and Mabel Lenora (Warson) DeRosear on December 24, 1930 in Memphis.

Dwight attended Memphis High School, graduating in 1948.   He graduated from Kirksville State Teacher’s College (now Truman State University) in 1952.   Dwight enlisted in the United States Army upon graduation, and he served in the Korean conflict earning the rank of Staff Sergeant.

Dwight was employed with the United States Postal Service for 36 years, serving as postmaster at the Gorin and Memphis offices.   Dwight and Mansel Garret owned and operated the Creative Printers and worked nights.  Dwight worked at the Bank of Memphis for 17 years before retiring for a second time.

He achieved the rank of Eagle Scout at an early age.  He was a 60-year member and past Master of the Memphis Masonic Lodge #16 A.F. & A.M.  Dwight was also a member of the Wallace W. Gillespie Memorial V.F.W. Post #4958 of Memphis, St. John’s Catholic Church, and set on numerous committees.   He was elected to the Scotland County Health Department and then the Scotland County Hospital Board where he was recently recognized for 26 years of service.   Dwight was a member of the Baring Country Club and served as Vice-President of the Board of Directors for a number of years.   Dwight was a proud founding member of the Lady Baring Yacht Club, earning the title of Commodore.

Dwight loved and was proud of his family.  He was happiest when his children, grandchildren, and friends were at the house.   Dwight enjoyed entertaining by hosting “Happy Hour” several times a week – where he always enjoyed a Manhattan.

He was renowned for yelling “Mark Twain”, referencing the water depth, when a boat passed close to the cabin.

“It’s Red, It’s Hot, It’ Delicious” is still heard when grilling is taking place.   Rallying the Yacht Club with a cheer of “Yachteneers: Yahoo” lives on.

He was preceded in death by his wife, Joan; parents; in-laws: John and Maymie Fetters; grandson, Joel DeRosear; sister and brother-in-law, Lois and Bob Ross; brother and sister-in-law, Dean and Margie DeRosear; brothers-in-laws and sisters-in-laws Mary and Jess Rockhold and Ellen and Ted Gundy.

Burial, with military honors provided by the Wallace W. Gillespie Memorial V.F.W. Post #4958 of Memphis, was in the St. Aloysius Cemetery in Baring.

A Masonic service was performed by the Memphis Lodge #16 A.F. & A.M. following visitation on September 30.

Online condolences may be sent to the DeRosear family by signing the online guestbook at gerthfuneralservice.com.

Memorials are suggested to St. Jude Children’s Hospital or St. John Catholic Church, and can be left at or mailed to the Gerth Funeral Service, 115 S. Main St., Memphis, MO 63555.