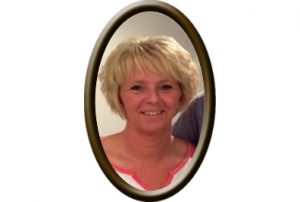 Patty Howes, 50, of Memphis, MO passed away peacefully at her home in Memphis, MO on August 10, 2021. The daughter of Lanny and Jane Bowen she was born July 11, 1971 at Kirksville, MO. Being the youngest of three children, she grew up with her brother Joe Bauyan and sister, Tina in Knox County.

Patty was the fiancée of Jeff Cline of Memphis, MO, whom she enjoyed attending the St. Louis Cardinal Baseball games with, taking ranger rides, fishing and their everyday life together.  She was a very proud, mother, and grandmother spoiling her grandchildren Kyson and Kiley Austin as well as her two four legged grandchildren Zoey and Chasis. She loved being the Aunt to all her nieces and nephews: Amie (Randall) Shahan, Corey (Jenny) Miller, Brooklin (Tyler) Briggs, Preston Miller, Joe Bauyan and 10 great nieces and nephews.

Patty was known for being a very hard-working woman, organized in every aspect of life, a Luke Bryan and Kenny Chesney lover and if you would have asked her who the celebrity to meet was, she would have said Carl Edwards from NASCAR.  She loved sharing the story about her visit with him while in Rusk Rehabilitation Center in Columbia, MO.  Patty was most proud of her son Austin, she was one of his biggest fans on and off the track, it was a rare occasion if you didn’t see her in the stands. Friday and Saturday nights were for racing in her eyes, and she loved being able to cheer him on.

She was employed by the NEMO Regional Planning Commission since October 1992 where she was the Assistant Housing Director. She also managed multiple rental properties in the area.

Patty was preceded in death by a son, Codey Howes on November 17, 1988, both parents Lanny and Jane Bowen and 4 aunts and uncles.

Those left to cherish her memories are her soul mate, Jeff Cline of Memphis, MO; her children: Ashley (Bryan) Calicura of Newark, MO; Austin Howes (Kiersten Pratt) of Canton, MO and a bonus to Nova and Penelope Cline of Memphis, MO; grandchildren: Kyson and Kiley; brother: Joe Bauyan of Oveido, FL and a sister: Tina (Carl) Miller of Kirksville, MO; An Aunt Janice (Kim) Smith and an Uncle Jerry “Jake” Shubert as well as many nieces, nephews, and cousins survive along with her two four legged grandchildren, Zoey and Chasis.

Memorials in lieu of flowers are suggested to the family for their discretion and may be left at or mailed to the Payne Funeral Chapel, 202 E. Madison St., Memphis, Missouri 63555.

Funeral services were held Wednesday afternoon, August 18, 2021 at 2:00 P.M. at the Payne Funeral Chapel in Memphis. Interment followed in the Memphis Cemetery east of Memphis.

Online condolences may be shared with the family by logging onto Payne’s website at paynefuneralchapel.com and signing the guest book.