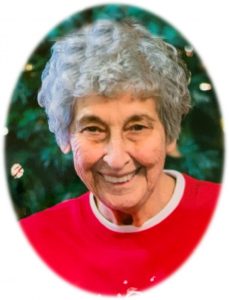 Ruth was born on October 27, 1930, near Rosati, Missouri, the daughter of William H. and Mabel Addie Leonard Holton.

In the early 30’s her family moved to a farm north of Downing, Missouri and she graduated from the Downing High School in the Class of 1948. She continued her education at Kirksville State Teachers College and taught in a rural school near Downing.

Ruth caught the eye of Charles after he returned from service and married the Love of Her Life. They were married in Lancaster, Missouri on November 5, 1948, and to this union four children were born.

Ruth was a member of the Richland Baptist Church, near Hitt, Missouri, and was very active in the church.

Ruth and Charles farmed most of their life and never really retired, always doing something on the farm. They always took the family on vacations and enjoyed traveling. She enjoyed gardening, canning, and was dedicated to her church family, but most of all she loved her kids, grandkids, and her great and great-great grandkids. She always had cookies and sweets for them.

Ruth was preceded in death by her husband Charles Jr. Alexander, on January 22, 2020, three brothers and sisters-in-law, Charles and Fern Holton, George and Doris Holton, and Robert and Tyra & Jo Holton; and a brother-in-law, Leland Ketchum.

Funeral services were held, Friday, July 23, 2021, at 11:00 AM at the Memphis Funeral Home with Pastor Richard Lourcey officiating.  Burial followed the service at the Pleasant Hill Cemetery, north of Crawford, Missouri.

An expression of sympathy may be made to the Richland Baptist Church or Pleasant Hill Cemetery.  Memorials may be left at or mailed to Memphis Funeral Home, 378 South Market Street, Memphis, Missouri 63555.

Memphis Funeral Home is in charge of arrangements.