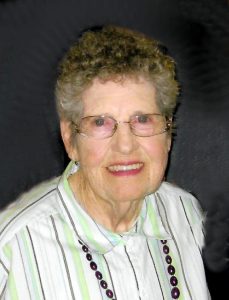 Beverly was born on January 11, 1932, in Sac County, Iowa. She was the daughter of Gerhard Theodore and Nora Lenore Neville-Habenicht.

Beverly and Harold were blessed in the early years of their marriage to live in Miami, FL. During these years Beverly worked as a homemaker and part-time employee in the concession stand at a local Drive-In movie. It was during this time that the family attended a Billy Graham Crusade. Shortly after this she met a friend who invited her to a bible study where she accepted Jesus Christ as her Savior.

The family moved to Omaha, Nebraska in 1965 where Harold began driving semi-truck over the road and Beverly worked as a manager at the 7-11 convenience store and as a CNA at a Deaconess’ home. Beverly began her own business called Bev’s Gifts and Imports where they traveled to Mexico and imported various statuary and paintings that were sold at her store.

Eventually Beverly acquired her CDL license and drove truck with Harold across the US enjoying many sights together. They lived in Omaha until they moved just north of Crawford, Missouri in 1983.

In Crawford, she enjoyed raising her goats, breeding dogs and growing a large vegetable garden. Fishing and playing backgammon and Othello with her grandchildren were some of her favorite pastimes. After many years they moved into Memphis, MO where they lived in the Senior Housing Complex and attended the First Baptist Church until moving to the nursing home in Edina, MO.

Visitation will be from 1:00 p.m. until service time at the Church on Saturday.

Burial will be in the Pleasant Hill Cemetery north of Crawford, Missouri. An expression of sympathy in memory of Beverly Jean Gore may be left to the Memphis First Baptist Church.