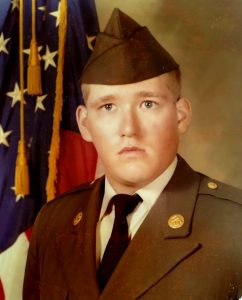 Nicholas “Nick” Lee Aldridge, 59, of Arbela, Missouri, passed away on June 5th, 2021, at Blessing Hospital in Quincy, Illinois after a 30-month battle with cancer.  His mother, Shirley, his sister Julie, and his brother David were at his side in his final moments, providing love and comfort.

He was born May 27th, 1962, in Kirksville, Missouri, the son of Shirley and Walter Aldridge.  He graduated from Keokuk High School in 1980 and joined the United States Army, where he was stationed in Fort Bliss, Texas.  He earned many honors, including being named Soldier of the Quarter as a member of the Regiment of Riflemen.  He had previously been awarded Soldier of the Month.  The award signified excellence on his part and adds to the recognition of the high caliber of young men and women serving with the 3rd Armored Calvary Unit.  The award was presented for Nick’s professionalism and pride for his country.  He was later stationed in Germany from 1983 to 1985. He retired as a Master Sergeant. He then continued his service as a member of the Army Reserves where he was a Drill Sergeant in Fort Leonard Wood, Missouri.

Nick was employed by Wal-Mart for over 15 years and was a night manager for online orders and was very respected by his co-workers and employees.  He had also been employed at the Catfish Place in Arbela, Missouri, as well as working for Brad Wittstock at the sawmill in Arbela, where he earned the nickname “Saw Dog”.

Nick was a life-long member of Memphis Lodge #16 Ancient Free and Accepted Masons and had achieved the degree of Master Mason.  He was also an honorary member of The Northeast Corner Chapter of the Widows Sons Masonic Riders Association.  He was given the “Ground Pounder” in honor of his many years of military service to our country.  Nick had memorized all of the Masonic lectures and delivered them with amazing clarity every time he was asked.  His years of dedication to the lodge and its worthy charities touched many lives.  He radiated a quiet confidence that commanded respect in every Masonic function.  His presence will be sorely missed.  Nick would wear his black leather motorcycle vest with Masonic patches with great pride.

Nick was also a lifetime member of the VFW and loved spending time with his fellow veterans.

Nick loved history and reading.  He also loved music including country and rock-n roll.  He owned many record albums dating back to the 1970’s.

Nick was ornery and enjoyed giving his friends and relatives a hard time.  He also loved to give the nurses a hard time while he was receiving treatments for his cancer. They would give it back to him just as hard, and Nick played off it, and loved every minute of it.

He was preceded in death by his maternal and paternal grandparents, his father, Walter, and several aunts and uncles.

Memorial services were held Friday Afternoon, June 11, 2021, at 2:00 P.M. at the Payne Funeral Chapel in Memphis, Missouri.  Officiating the service was Pastor Leon Buford. At the conclusion of the service Military rites were provided by the Wallace W. Gillespie V F W Post # 4958 of Memphis and Masonic services were conducted by the Memphis Lodge # 16 A F & A M. Thursday evening.

Online condolences may be sent to the Aldridge family by logging onto Payne’s website at www.paynefuneralchapel.com.