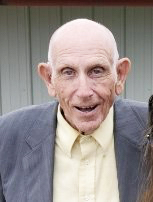 He was born on February 25, 1933, near Arbela, Missouri, the Lawn Ridge Area, the son of Roy Clark and Hallie Beard Adams.

Charles served his country in the United States Army, during the Korean Conflict, from 1953 to 1955. He was a member of the VFW in Memphis, Missouri.

He returned home and married Margaret Louise Egbert on May 22, 1956, in Gorin, Missouri and to this union three sons and two daughters were born.

Charles worked road construction for over 20 years, farmed, raising cattle, pigs, horses, sheep, and row crops. He owned his own bulldozer and did his own land improvements and farm conservation practices.

He was a member and was an Elder at the Kingdom Hall of Jehovah Witnesses first in Colony, Missouri and later in Quincy, Illinois. He enjoyed his church family. He recorded a song on a 33 record. He enjoyed playing games with his family and riding around on the farm on his Mule. He also loved his weekly buggy rides with his horse “Ginger”, his dog “Sandy” and his other horses, “Sugar” and “Bugar”.  He restored a Model A Buggy, a Super C tractor and a F20 tractor.

Full Military Honors will be Saturday, May 22, 2021, at 2:00 p.m. at the Charles Adams Farm near Gorin, Missouri. Honors by the Wallace Gillespie VFW Post of Memphis, Missouri.

A Memorial Service will be at 3:00 p.m. Saturday, May 22, 2021, at the Charles Adams Farm near Gorin, Missouri, Richard Lourcey officiating.

An expression of sympathy in memory of Charles Adams may be left to the Truman VA Hospital or the Memphis VFW. A memorial may be left at or mailed to the Memphis Funeral Home 378 S. Market Street, Memphis, Missouri 63555.