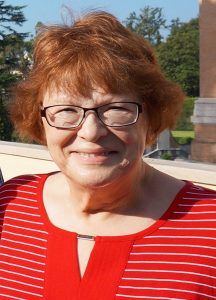 On August 4, 1973, Gay married Larry Holman at the First Christian Church of Lancaster, Missouri. In 1974, Gay and Larry moved to Odessa, Missouri, where they were both teachers in the Odessa R-7 School District. Gay taught business and keyboarding at Odessa High School for 28 years, retiring in 2003. During her years teaching, Gay advised many students at district, state, and national Future Business Leaders of America (FBLA) competitions, and she was inducted into the Who’s Who in Missouri Business Education in 1999, for her dedication in promoting and improving business education. She was truly an excellent teacher and a “favorite” of many.

In retirement, Gay and Larry moved to Savoy, Illinois. Gay was a faithful volunteer at Sola Gratia Farm, a community-based farm that supports local hunger programs. For over 7 years, Gay seeded, weeded, washed, and packed produce for 20-40 hours per week at Sola Gratia Farm. She treasured her time at the garden, and she was recognized with the Community Foundation of East Central Illinois Heart of Gold Award in 2020, for her volunteer service.

Gay is remembered by many for her vibrant smile, contagious laugh, no-nonsense attitude, and passionate spirit.

A visitation service will be held at Norman Funeral Home in Lancaster, Missouri, on April 16, 2021, at 10:00 AM. A graveside service will follow visitation at approximately 11:00 AM at Arni Memorial Cemetery.