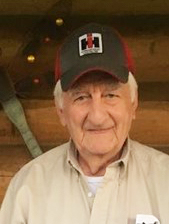 Darwin Lee Steggall, 87 of Lancaster, Missouri passed away on Friday, April 2, 2021 at the Northeast Regional Medical Center in Kirksville, Missouri.

The son of Maurice Anthony and Berniece Marion (Kunkle) Steggall, he was born on December 19, 1933 in Maynard, Iowa.  He was a graduate of the Lancaster High School in Lancaster, Missouri.

On February 20, 1951 in LaPlata, Missouri, he was united in marriage to Barbara Jene Beeler and to this union three sons were born, James Robert, Michael Lee and Mark Anthony.

Jim attended the Schuyler County Church of Faith in Lancaster, Missouri as long as his health permitted.  He was also a member of the United Auto Workers Union with the International Harvester Company from which he retired from in Moline, Illinois.  Following Jim’s retirement, he enjoyed people and making them happy by delivering flowers and Meals on Wheels.

He enjoyed mowing several yards in the Lancaster area, was an avid toy collector and especially enjoyed watching the grandchildren during their sporting events.

Funeral services will be held on Friday, April 9, 2021 at 11:00 a.m. at the Schuyler County Church of Faith in Lancaster, Missouri with Sonny Smyser, Pastor of the Schuyler County Church of Faith officiating.  Musical selections of “Just A Closer Walk With Thee” and “The Long Way Home” will be sung by Michael and Gannon Steggall and “Sing Me Back Home” will be sung by Chuck Hayes.  Pallbearers will be Gannon Steggall, Brock Steggall, Josh Weaver, Brody Weaver, John Waller and Ryan Bushnell.  Honorary pallbearers will be Dennis Newberry, Tyler Weaver, Randy Whitlow and Randy Shaw.