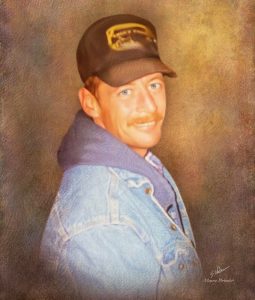 Carl was a mechanic, working on anyone’s car but his own. He loved fishing, hunting, watching old westerns, going to rodeos, riding horses and was an excellent cook. Carl was previously employed by many different places including Interstate Battery and Trump Trucks.

Survivors include his wife, Tammy Hammond of Wyaconda, his mother Carol Dobson (Rick Nelson) of Arbela, his daughter Ann Marie Hammond and her significant other, Marty Neisen of Lewistown, his son Joshua (Sonia) Yocum of Mt. Pleasant, IA, five grandchildren, Hazel Sady Yearns, Sidney Yearns, Kiannah Griffan all of Lewistown, Malena Yocum and Aydan Yocum of Mt. Pleasant, IA, one brother, Max (Susan) Hammond of Berea, KY, father and mother-in-law Robert (Judy) Yocum of Wyaconda, one brother-in-law Chad Yocum of Wyaconda, one sister-in-law, Roby Hammond of Kahoka, and several nieces and nephews. Carl was preceded in death by his father Max Hammond Sr., one brother John Hammond and one brother at infancy, Joey Hammond, as well as one sister Patty Adams.

Cremation rites will be accorded. A visitation for Carl will be held on Thursday, March 18, from 5:00-6:00 pm at Wilson & Triplett Funeral Home in Kahoka. Memorials contributions in Carl’s name are suggested to the family with checks payable to Tammy Hammond. You are invited to share your memories of Carl and leave a condolence at www.wilsontriplett.com.