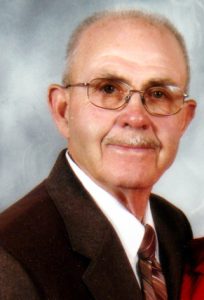 He was born on December 28, 1938, in Gorin, Missouri, the son of Everett Elias and Vivian Lorene Scifers Erickson.

Oren graduated from the Gorin High School in the Class of 1957.

On April 8, 1961 in Gorin, Missouri, Oren married Celina Marie Laverty and they would have celebrated their 60th anniversary next month.

He served his country in the United States Army during the Cuban Missile Crisis where he was stationed in Germany.

Oren was a kind, generous, hardworking man with patience which never wore out.   Children and grandchildren were the highlight of his life and he had a special touch when they were babies, he was known as the baby whisperer.  He also enjoyed teaching them how to fish and drive tractors when they were older.  His life was marked by hard-work, diligence and resilience.  He was a true herdsman as he started with a herd of Shorthorn cattle as a teenager and continued with pride managing livestock for his career.  In addition, he owned and operated a successful trucking business for 20 years known as C&O Trucking.    Oren bought his first IH tractor in 1957 and still has it today in his collection of fully restored tractors.   Over the years Oren and Celina enjoyed their many travels with friends and family all over the world and especially enjoyed staying the winters in Florida or Texas.

He was preceded in death by his parents Everett and Vivian Erickson; two sons, George Oren Erickson and Robert Edward Erickson; and a brother, Johnny Erickson.

Burial with Full Military Honors will be in the Gorin Cemetery in Gorin, Missouri.

An expression of sympathy in memory of Oren may be left to the Gorin Cemetery, Memphis Masonic Lodge or the Rutledge O.E.S.  A memorial may be left at or mailed to the Memphis Funeral Home 378 S. Market Street, Memphis, Missouri 63555.