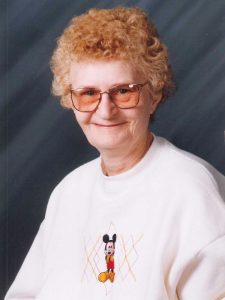 Beverly B. Garrett, 86, of Memphis, Missouri passed away Monday morning, March 1, 2021, at the Scotland County Hospital in Memphis after a brief battle with cancer.

There will be a Celebration of Life at a later date.

The daughter of Harold and Veronica Walbran, she was born April 18, 1934 at Sibley, Iowa.  She married Vilas (Fat) Garrett on June 20th, 1960 and their daughter, Pamela Ann and son, Allen Dean soon arrived. They enjoyed growing up one block from the Memphis park and pool. Beverly remained at that same home for the duration of her life.

She enjoyed taking care of her home and yard and was known to hang clothes out to dry year ‘round.  She was happy to complete home projects, visit with family, and spend time with her faithful companion, Elvis, the chihuahua.

She was a proud American and she and Elvis were fans of the Fox News.  She loved her family and cherished time spent with her grandchildren.

She spent many years employed at the Catfish Place and later in food service at the Scotland County Care Center.  Beverly was a hard working and dedicated employee who knew her way around the kitchen.

She was preceded in death by Husband Vilas, in June of 1974, her parents, and a son-in-law, Mike Doubet.

Left to cherish her memories of their dear mother and grandmother are her daughter: Pam Doubet of Memphis; son: Allen Garrett and fiancée Marla Greiner of Memphis;

Memorials are suggested to the Scotland County Cancer Fund in her memory and can be left at or mailed to the Payne Funeral Chapel, 202 E. Madison St., Memphis, Missouri 63555.Online condolences may be sent to the Garrett family by logging onto Payne’s website at www.paynefuneralchapel.com