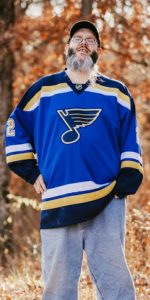 Cremation rites are under the direction of Bibb-Veach Funeral Home in Bowling Green, Missouri. A Celebration of Life service will be held Saturday, March 6, 2021 at the New Testament Church in Rutledge, Missouri at 2:00 p.m.

Shawn was born September 16, 1977 to Dennis and Janet Riney O’Rourke in Chicago, Illinois. He was joined together in marriage to Nicole Isolde Casey on March 16, 2019 in Rutledge, Missouri. She survives.

Shawn was preceded in death by his mother, Janet.

Shawn grew up in Rutledge, Missouri. He graduated from Scotland County R-1 in 1995. While attending school, Shawn worked at Keith Diner in Memphis, and the Heartland Dairy for a period of time. He spent the last 9 years working for Sharkey’s/DHL in Hannibal. Shawn enjoyed playing cards, especially 4-point, and drinking a cold Bud Light with his buddies. His daughter was the light of his life, and he loved her dearly.

In lieu of flowers donations may be made to the family.

Online condolences may be left at www.bibbveach.com