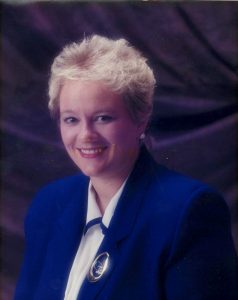 Ellen was employed for 30 years by the State of Missouri as Secretary to the First Circuit Judge.  She retired on April 1, 2020 after serving as Secretary for Judge E. Richard Webber and later for Judge Gary Dial. She also served two terms as Scotland County Public Administrator. For several years, she was a partner in a catering business with her close friend, Donna Oilar.

Ellen had a special place in her heart for children, and she enjoyed being a surrogate aunt to numerous children over the years.

Some of Ellen’s favorite things were cooking, sewing, and trivia games.  She was an excellent cook who enjoyed trying new recipes and feeding people. She used her sewing skills as the unofficial seamstress for the Scotland County R-1 music and band program   In high school she was a member of the SCR-1 College Bowl team. As an adult, she was a member of Team NEMO, a very competitive group that entered and won many trivia tournaments in the tri-state area. Ellen had many varied interests and was always ready to take on a new project of some kind.

Ellen’s faith was an important part of her life and helped sustain her during the long months of her last illness.  In her earlier years she attended the Mt. Moriah United Methodist Church in her rural community.  As a young adult, she was baptized at the Memphis First Christian Church by the Rev. Jim Estep. For the last several years Ellen was an active member of the Memphis First Baptist Church, where she was Hospitality Chairman and former church treasurer.

A Celebration of Life will be held at a later date. To honor Ellen’s memory, memorials may be given to the Scotland County School Foundation; to SCAMP for the SCR-1 band trip to Hawaii; or to the Memphis First Baptist Church for youth programs.

Online condolences may be sent to the Aylward family by signing the online guestbook at gerthfuneralservice.com.