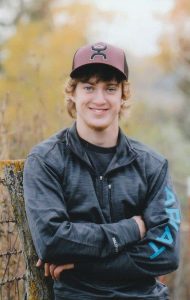 Jacob Thomas Atkinson, 19 of Lancaster, Missouri passed away at the University of Missouri Hospital in Columbia, Missouri on Friday, January 29, 2021.

The son of Brian Thomas and Tammy Jane (Jackson) Atkinson of Lancaster, Missouri, he was born on January 3, 2002 in Memphis, Missouri.  He was a 2020 graduate of the Schuyler R-I High School Class in Queen City, Missouri.

Jacob is preceded in death by his grandmother, Mickey Jackson on January 7, 2018.

Jacob was a member of the Queen City Baptist Church in Queen City, Missouri.

Jacob was employed with 4 Winds Construction laying fiber optic lines and with Loyd Jackson’s Garage.  While in school, Jacob was a member of FFA Trap Shooting Team, Track, Football, and Wrestling which he excelled in all.  His greatest hobbies were riding four wheelers, singing and playing his guitar, working on vehicles alongside his family and revving up his motors!  He was always kind, friendly and fun loving.  Faith is the only way we are going to make it.  None of us are wise enough to do it on our own.

Funeral services will be held on Saturday, February 6, 2021 at 10:00 a.m. at Norman Funeral Home in Lancaster, Missouri with Bob Smith, Pastor of the Queen City Baptist Church in Queen City, Missouri.  Music will be special selections of “Come A Little Closer”, “Will The Circle Be Unbroken” and “The Old Rugged Cross”. Soloist will be Corbin Bulechek.  Pallbearers will be Wyatt Pinson, Hunter Yearns, Slade Atkinson, Remington Byrd, Tristan Cline, Corbin Bulechek, Spencer Campbell.  Honorary pallbearers will be Andrew Robb, Hunter Byrn, Hunter Rowland and Dakota Solomon.

Memorials have been established for the family.  Burial was held in the Arni Memorial Cemetery in Lancaster, Missouri.  Online condolences may be expressed to the family by logging on to normanfh.com.  Arrangements are under the direction of the Norman Funeral Home of Lancaster, Missouri.