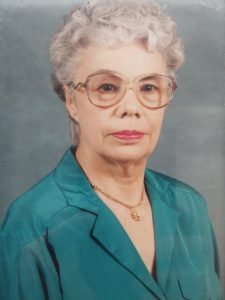 She was born November 5, 1924 at her parents’ — Ward and Elma McConnell’s– farm home just East of Downing. She grew up in the Schuyler/Scotland area on her family’s farms and attended one room schools. She was close with her cousin JR Schubach, who stayed with them at times and Charles Wineiger, who was a close neighbor friend. Her family took Sunday dinner whenever possible to her beloved maternal grandmother Ida Roberts. Freda lived with her grandmother Ida and attended all four years of high school in Glenwood, MO. There she made a lifelong friend in Geraldine Olson which resulted in regular visits and correspondence for 79 years. Freda then attended NEMO State Teachers College in Kirksville, MO, receiving her teaching degree.

One summer night in Stiles, Iowa, at a movie picture show that was shown on the side of the Stiles General Store, Freda met the love of her life, Harry Cleveland Crook. They were married August 22, 1945 at the Methodist Church in Memphis with Victor and Estelene Rush attending.    Harry preceded her in death on May 31, 1992.

After a honeymoon trip to Kansas City, MO, Freda and Harry returned to their farm that they purchased from Harry’s father, Cleve Crook. The Korean War came and Harry served in the Philippines, Army Air Corp as a Teletype Operator. During this time, Freda stayed with her parents and taught school at Spees, Poe, and Barker one room country schools.  She stayed with school district families during the school year and saved all her money to purchase furniture for when Harry returned. After his return, they made their home on the farm with all new furniture and a jersey milk cow given to them by her father. It was here they started their family.

Times were hard for everyone then. Harry sent money each month to Freda’s parents to help them. Harry and Freda purchased a farm in the Crawford area in the late 1950s making that their home. From the beginning of their marriage until the girls were grown, Freda raised chickens for meat and had chickens for eggs to help provide for their 3 daughters. Freda also made all her daughters’ dresses, tops, and skirts. Freda juggled schedules to get the girls to 4-H, acrobat, swimming, and piano lessons. Freda faithfully visited her grandmother Ida Roberts until Ida passed at age 99. Not long after the birth of her second daughter, Freda sustained serious injuries in a pedestrian car accident. She was hospitalized for 30 days during which time her mother and eldest daughter helped Harry with the baby.

Although they left the Killwinning neighborhood for Crawford in the 1950’s, Freda kept close contact with friends and relatives in that area. She was a charter member of the 4-Corner Extension Club and attended it faithfully all the years it was active. She hosted meetings in her home as did other members in the later years of club activity. Freda hosted numerous Stanley, Tupperware, Artex and Mary Kay parties. She also loved to see the Avon lady and Watkins sales persons arrive. Freda and Harry enjoyed many 4th of Julys with their neighbors the Slavins and always spent the holidays with Freda’s parents. Freda continued the hard work of dressing chickens, gardening, canning, and freezing to provide for the family as well as to serve to the farm hands that were hired at various times. Freda and Kathleen attended the Pleasant Hill Presbyterian Church and later the family attended the Richland Baptist Church where Freda was baptized.

Freda’s love for children was always apparent to the neighborhood children and she was able to share it further with her church family by teaching Sunday School and Bible School and helping to prepare delicious meals for church functions and Girls and Boys Camp Leeper.

Freda loved to travel and so enjoyed traveling with Harry and his friends as he presented his poems in various settings in Missouri and Iowa. Freda was swept away by Harry’s poems and his devotion to his beliefs. She was a faithful partner to his endeavors and always believed he would succeed. She supported his ideas no matter how far outside her comfort range and she was never was disappointed. After Harry’s passing, Freda traveled with friends to various destinations in the United States, Canada, Great Britain, and Ireland and with her cousin Francine Nitti to Italy.

Freda had a great love for animals, birds, and especially her flowers. Many would see her out in her yard with her cane wearing her pink John Deere cap looking at her flower beds.

Her greatest joy was spending time with her family. She was so proud of what each one accomplished. She experienced their life adventures and was always untiring when they needed her support. When her grandchildren came her joy was immeasurable. She was always there for them when she was needed, and their visits were the highlight of her life. Freda was so proud of the beautiful/handsome, successful in family and business, people that her grandchildren have become. Freda spoke of the family characteristics she saw in each of her daughters and grandchildren.

Freda spent her final years at the Scotland County Care Center. She was loved there and enjoyed so many of the staff members. Freda left all to mourn the loss of her fun-loving spirit and genuine love of people on February 4, 2021. Although she was 96, friends and family were not ready to lose her. She often said, “If I had known I was going to live this long, I would have taken better care of myself!”  She leaves her loved ones with broken hearts only consoled by the knowledge she is with her beloved family in God’s Kingdom.

Memorials are suggested to the Richland Baptist Church Cemetery and can be left at or mailed to the Gerth Funeral Service, 115 S. Main St., Memphis, MO 63555.

Condolences may be sent to the family of Freda Crook by signing the online guestbook at gerthfuneralservice.com.

Arrangement are under the direction of the Gerth Funeral Service.