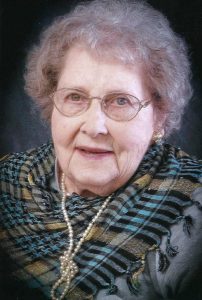 She was born March 8, 1930 on a farm east of Antioch, MO the only daughter of Edward and Mae Schmid Korschgen.

Mary attended Stone School, St. Patrick School and graduated from Kahoka High School with the class of 1947.  She then attended Gem City Business School following high school.  She worked for Gutting Funeral Home and then the Kahoka Cheese Plant for a short period of time as a bookkeeper/secretary.  She then met Richard O’Brien.  The courtship lasted three months.  When Richard proposed he said, “I have a house to live in.”

On November 6, 1948 she was united in marriage to Richard Eddie O’Brien at St. Michaels Catholic Church in Kahoka.

They lived in Luray for three months, then purchased a farm Northwest of Luray where they spent the remainder of their married lives working side by side farming and raising four children.

Mary was an excellent cook, gardener and seamstress.  She believed that a good education was very important.  Mary loved to play the piano and did so when Richard was outside.

She was a member of St. Michael’s Catholic Church and the Ladies Altar Society.  She also belonged to the Oats Bus group for a few years.  After suffering from a severe stroke in 2010, Mary lived out her remaining days at the Clark County Nursing Home where she enjoyed playing bingo and attending any musical events.

A Mass of Christian Burial was held at 1:00 p.m. Monday, February 1, 2021 at St. Michael’s Catholic Church in Kahoka with Father Rob Fields officiating. Burial followed in the Kahoka Cemetery.

A visitation will be held from 12:00 pm until the time of service at the church. Social distancing requirements will be in place and attendees may be limited according to those requirements.  Masks are required.

In lieu of flowers, memorials may be made to St. Michael’s Ladies Altar Society or the donor’s choice.

Online condolences may be made to the family at www.vigenmemorialhome.com.