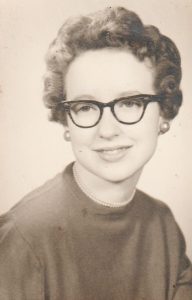 Margaret Ella (George) Mobley, 80 of Downing, Missouri passed away at her home on Sunday, January 24, 2021.

She was preceded in death by her parents.

Margaret worked with Maxine Willier at Mid Missouri Travel Agency as a travel guide and at the Lancaster Excelsior Newspaper for several years.  She was an active genealogist.  She was a founding member of the Downing Community Christian Church and was involved as the treasurer and as the pianist for many years.  She helped to establish the Schuyler County Chapter of the Daughters of the America Revolution and held state offices in several of these organizations.  She was a member of the Royal Neighbors, The National Society of Colonial Dames XVII Century, The National Hugenot Society, Life Member of the Jamestowne Society, The Historical Society of Washington County, Virginia Inc., First Families of Tennessee, Daughters of the American Colonists and Red Hatters.

A Celebration of Life service will be held on January 28m 2021 at the Norman Funeral Home in Lancaster, Missouri between the hours of 6 p.m. and 8 p.m. The body will be interred at a private family service at Jacksonville, Missouri at the Missouri Veterans Cemetery.  Memorials have been established for Downing City Cemetery.  Online condolences may be expressed to the family by logging on to normanfh.com.  Arrangements are under the direction of the Norman Funeral Home of Lancaster, Missouri.