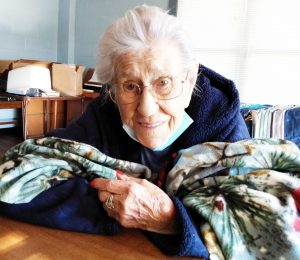 EllaB (Lehr) Eiffert, 100 passed away on Saturday, January 23, 2021 at the Schuyler County Nursing Home in Queen City, Missouri where she had been a resident since August 2020.

The daughter of Charles Chester and Henrietta (Drake) Lehr, she was born on August 4, 1920 in rural Lancaster, Missouri.   On June 4, 1965 in Monmouth, Illinois, she was united in marriage to Merle Edwin Eiffert.

EllaB was a member of the Downing Christian Church in Downing, Missouri.

Funeral services will be held on Wednesday, January 27, 2021 at 11:00 a.m. at Downing Christian Church in Downing, Missouri with Larry Smith, Pastor of the Downing Christian Church officiating.  Musical selections of “In the Garden”, “Mansion Over the Hilltop” and “One Day At a Time” will be performed by Betty Anderson, organist and Cole Tippett, soloist.  Pallbearers will be Walter Metz, Donnie Queen III, Bill Queen, Andrew Rairden, Yanni Coutsougeras and Skylar Wheeler.  Honorary pallbearers will be Joel Gooden, great grandchildren and the great great grandchildren.  Visitation will be held on Wednesday, January 27, 2021 between the hours of 10:00 a.m. and 11:00 a.m. at the Downing Christian Church in Downing, Missouri.  Memorials have been established for Schuyler County Nutrition site.  Burial will be in the Downing City Cemetery in Downing, Missouri.  Online condolences may be expressed to the family by logging on to normanfh.com.  Arrangements are under the direction of the Norman Funeral Home of Lancaster, Missouri.