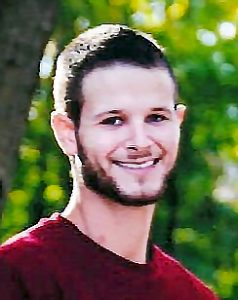 He was born in Texas.  Charles was adopted by David and RaElla Wiggins in February of 2000 when he was nine years old.

Charles attended Scotland County R-1 through his junior year.   He later earned his G.E.D.  While in school, he was active in the FFA, played trumpet in the band, was on the junior high football team and played intramural basketball.  Charles enjoyed riding his motorbike and hunting.

He went on to work in construction, focusing on masonry and concrete work.   Charles will be remembered for being very polite.

He was preceded in death by his biological mother and his grandfather, Ralph St. Clair.

He is survived by his parents, David and RaElla Wiggins of Memphis; ex-wife, Ashley Theisen-Wiggins of Buffalo, MO; children, Xarra and John Wiggins of the home; a brother, Caleb (Jaclyn) Wiggins of Memphis, and a sister, Connor Wiggins of Kansas; grandparents: Dr. Larry K. Wiggins and Patricia Wiggins, both of Memphis, Virginia St. Clair of Kahoka, and Cynthia Newby of Texas; several aunts, uncles, nieces, nephews and cousins.

A memorial service was held on January 2 at the Gerth Funeral Chapel in Memphis with Rev. Robert Moseley officiating.

Memorials are suggested to a fund for his children and can be left at mailed to Gerth Funeral Service, 115 S. Main, Memphis, MO.

Arrangements are under the direction of the Gerth Funeral Service in Memphis.