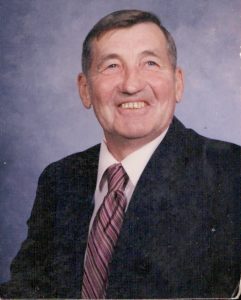 Leonard was born on July 8, 1934, in Shelby, Nebraska the son of Joseph and Agnes M. Kastl Stanek.

His family moved around a lot to find work, but Leonard graduated from the Fox Rural School north of Hurdland, Missouri in 1948 and returned to Nebraska in 1951.

He served his country in the United States Army, from 1953 to 1955, in Korea where he earned the Korea Service Medal, United Nations Service Medal, National Defense Service Medal and the Good Conduct Medal.

On July 4, 1982 in Greensburg, Missouri, Leonard married Bonita Kay Davis and they relocated to Oklahoma to make their home.

They lived in Oklahoma and worked as a carpenter before retiring and returning the the Greensburg, Missouri area in 2004.

He is survived by his wife, Bonnie Stanek, of thirty-eight years, of Baring, Missouri; a son, David and his wife, Marie Magruder of Edmond, Oklahoma; grandchildren, Tyler, Dakota, and Kylie Magruder; a brother Jimmie and his wife, Karen Stanek of Missouri Valley, Iowa; nieces, nephews, cousins and a host of friends.

Leonard was preceded in death by his parents; a daughter Trudy Stanek; a sister, Helen and her husband, Dwight Magruder; and a brother, Richard and his wife, Ginger Stanek.

Visitation was held after 10:00 a.m. Tuesday, with the family receiving friends until service time at the funeral home.

An expression of sympathy in memory of Leonard Stanek may be left to the Knox County Cancer Fund. A memorial may be left at or mailed to the Doss Funeral Home 208 N. 4th Street, Edina, Missouri 63537.