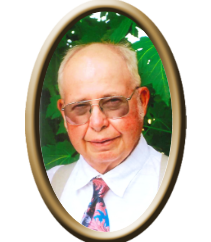 Joseph Orville Steele died November 15, 2020 at Scotland County Hospital in Memphis, MO.  Orville was born on his parent’s farm near Wyaconda, MO on February 7th, 1930 to Joseph and Sylva Matheson Steele.  He was a graduate of Wyaconda High School.

He married Johanna Peterson August 22nd, 1951, two weeks prior to being deployed in the United States Army to Japan and Korea.  He served for 2 years during the Korean War and worked as a parts clerk.  Upon his return from Korea, he purchased a farm near Gorin, MO and continued farming the remainder of his adulthood.  Orville was involved in a variety of roles in service to his community.  He was a member of the Gorin United Methodist Church and was very involved in church leadership throughout the years.  Orville also served on the Gorin School Board, Scotland County Board of Health, and was also on the Extension Council.

Orville enjoyed farming – driving his tractor in the field planting, harvesting crops with his combine, and working with livestock.  During times he was not busy farming, Orville was a passionate reader and especially enjoyed the Western novels by Louis L’Amour and Zane Grey.

In later years, Orville enjoyed maintaining a well-manicured yard by mowing a large portion of the farm property, including the much-loved lake.  He enjoyed many rounds of card games with friends.  His favorite activity was making memories with his family at the Lake – especially roasting hot dogs and marshmallows to a dark burnt crisp.  Orville will be dearly missed and fondly remembered by his family and friends for his quiet demeanor and consistent faith.

He is survived by his wife, Johanna of Gorin, MO, and his brother and sister-in-law, George and Donna Steele of Wyaconda, MO.  Orville is also survived by his daughter and son-in-law, Candee and Stuart Musgrove of Quincy, IL; his daughter, Teresa Sears of Gorin, MO; and his son-in-law, Mark Masden of Kirksville, MO.  He is also survived by his grandchildren, Alicia and Keith Shaffer of Quincy, IL; Andrew Musgrove of Des Moines, IA; Brett and Amanda Masden of Albia, IA; Eric Masden and Kate Klingborg of Muscatine, IA; William Masden and Keysha Dixon of Winfield, IA; Tyler and Kaylan Henstorf of Memphis, MO; Rebecca McNamar of Rock Island, IL; Bailey McNamar of Canton, MO; Kylee and Eric Root Quayle of Moberly, MO; Sabe and Ashley Sears of Rutledge, MO; and Greg Steele of Gorin, Mo.  Orville is survived by 10 great-grandchildren: Elaina and Emma Mohr; Rori Masden; Kenzie and Tanner Henstorf; Wilhelmina Root Quayle; Hallie, Ellie, and Mollie Sears; and Baby Masden due in March.

In lieu of flowers, memorials for the Gorin United Methodist Church or the Pleasant Grove Cemetery in Gorin, Mo, may be mailed to Payne Funeral Chapel, 202 E. Madison, Memphis, MO, 63555.

Online condolences may be shared with the Steele family by logging onto Payne’s website at www.paynefuneralchapel.com