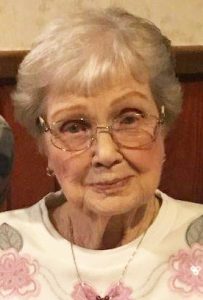 Mrs. Logston was born April 9, 1928, near Green City, the daughter of Granvil and Christena (Jones) Creason.

She was a graduate of Green City High School and attended Northeast Missouri State College to prepare to teach in the one-roomed, rural school.  Following her one-year teaching experience she married Robert Logston and to this union five children were born.

She was formerly a resident of Kirksville and for the past 47 years she lived in Ames, Iowa, where she worked at the 3M Company until her retirement.  She attended the First Christian Church in Ames.

She was preceded in death by her husband in 1986, a son Danny Lee in infancy, her parents, two sisters Imogene (Donald) Flanagan and Anna Mae (Clyde) Brown, her parents-in-law, five sisters-in-law, one brother-in-law and their spouses.

Elverean enjoyed reading, crocheting, quilting, traveling, and her “furry” companion Mickey.  She had traveled to the 48 contiguous states and to Austria and Italy as a “groupie” with Mark Twain Chorale International.

She was an avid Iowa State Cyclones fan and attended all home men’s and women’s basketball games and many of the Big Twelve basketball tournaments for more than 40 years.  Grandma’s homemade noodles were a favorite with her entire family.

Cremation rites have been accorded, and there will be a graveside service at the Rose Cemetery in Putnam County (on Highway 149) on Friday, September 25, 2020, at 1:00 p.m.  Joe Fulk will officiate the service.