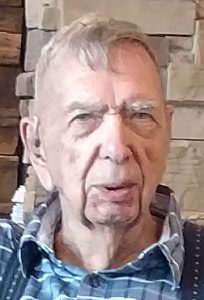 Leland Guy (Lee) Oliver, 91, passed away on January 24, 2020 at his home in rural Arbela, Missouri with family present.

He was born the son of Adelbert and Mary (Gower) Oliver on January 8, 1929 in Scotland County.

Leland graduated from Memphis High School in 1948 and joined the United States Army. He served on Guam as a mess sergeant. During his time of service, he found his life partner, Frances (Boley) Oliver. They were married in 1953 and shared 66 years together. He worked in real estate appraisal and investment for SM Clemenshaw Co. and later the Equitable Life Assurance Society for the next 30 years in two countries and eight different states.

He served the Lord in several capacities in local churches and assemblies during this time, most notably Believer’s Chapel in Dallas, Texas, and Hazelwood Bible Chapel in St. Louis, Missouri. He was a choir director, youth leader, deacon, and elder.

Leland began preaching in local churches as they had need, and pastored for several years at Gorin Baptist Church after retiring back to Northeast Missouri. He enjoyed using his talents for planning and construction to serve the Lord.

Some of his favorite activities were planning and taking road trips with friends and family. He so much appreciated fellowship with others. He and his wife, Frances, were privileged to have been able to serve with New Tribes Mission at the El Paso guest house on several occasions. Supporting the spread of the Gospel of Christ was of utmost importance to him.

Funeral services will be at 1 p.m., Saturday, February 1 at the Gerth Funeral Chapel in Memphis with Walt Barbier officiating.   Burial will be in the Combs Cemetery in Luray with military honors provided by the Herman Blum Post 192 American Legion Post/Ayer Boatman Memorial V.F.W. Post # 4342 of Kahoka and the Missouri Military Honors Program.

Memorial donations in lieu of flowers may be made to Ethnos 360 (New Tribes Mission) or Gorin Baptist Church and can be left at or mailed to the Gerth Funeral Service, 115 S. Main St., Memphis, MO 63555.

Online condolences may be sent to the Oliver family by signing the online guest book at gerthfuneralservice.com.