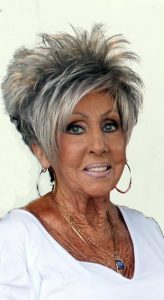 Louise was born on May 4, 1946, in Ft. Madison, Iowa, the daughter of Wilber Earl and Edith Mildred McCoy Daniels.

She graduated from the Gorin High School in the Class of 1964 and continued her education with the Kirksville College of Cosmetology.

Louise worked as a beautician and florist for many years at Chander’s Floral and Beauty Shop.

On March 23, 1967 in Memphis, Missouri, Louise married Charles E. “Chipper” Harris Jr., and to this union two children were born.

Louise is survived by her husband Chipper Harris of Memphis, Missouri; a son Christopher Charles and his wife Holly Harris of Memphis, Missouri; a daughter, Andrea Danielle and her husband Chris Hunt of Memphis, Missouri; seven grandchildren, Trever Dane and his wife Katie Harris, Hilary Grace and husband Taylor Rader, Olivia Claire Harris, and Lydia Grace Hunt and her special friend, Tristen Kice; one great-grandson; Chandler Cole Harris and Baby Harris due in June and Baby Rader due in July; a brother, Larry and his wife Darlene Daniels; a sister, Jeanie Weilbrenner; mother-in-law, Nancy Harris; several in-laws; along with numerous nieces, nephews, cousins and a host of friends.

At her request, Louise was cremated and a Celebration of Life Service was held Saturday, January 25, 2020, at the First Christian Church in Memphis, Missouri.

An expression of sympathy in memory of Louise Harris may be left to the Scotland County Cancer Society or the Gorin Cemetery. A memorial may be left at or mailed to the Memphis Funeral Home 378 S. Market Street, Memphis, Missouri.