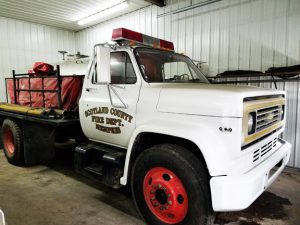 The Scotland County Rural Fire Board is considering replacing the local fire department’s tanker truck, which has been decommissioned due to mechanical issues.

The temperature outside was 26 degrees and it was snowing. There were nine board members and 12 firemen present.

Minutes from previous meetings and the treasurer’s report were handed out. Board member Tom Fender made a motion to approve the minutes and treasurer’s report. Wayne Durham seconded the motion, and it was passed.

The terms of the four board members set to expire in 2020 were discussed. Chad Triplett made a motion to retain the existing members, seconded by Brian Briggs. The motion passed.

Triplett made a motion to retain Freddie Henderson as board president. The vice-president and secretary/treasurer will remain unchanged as well.

Henderson discussed the concept of a tax supported levy which has been a topic of discussion over the years. He reported meeting with the Rutledge Fire Department on the topic, and concerns were addressed regarding current members that lived in Knox County. The Gorin Fire Department reported similar concerns related to any future fire district with current members in both Knox and Clark counties.

“If we were to go to the tax supported district, that would eliminate their members that lived outside of Scotland County,” Henderson said relaying some of the concerns of the other Scotland County fire protection providers.

Henderson mentioned that the board could have a gentleman from the tax supported office come in and discuss the options.

Discussion followed with a consensus reached that the current system was working and didn’t necessarily need to be changed. Fender made a motion to table the discussion on a tax-levy based fire district and Triplett seconded. The motion passed.

Kevin Holton gave a presentation on different training events that the department had held over the past year. Some of the events he talked about were lake rescues, school bus accident scenes and home rescues. He mention that more training will be happening this year.

Graham had mentioned that the ISO testing on the fire equipment rating will be performed in February. The fire department trucks were tested in December and passed inspection.

Triplett made a motion to adjourn the meeting. Bill McBee second the motion and it passed.

Members were reminded that annual dues are $40 and were due January 1st. if not paid by February 29th, membership will be cancelled. After March 1st there is a $20 reinstatement fee, making membership cost $60.